Potential that never got there.

In a quiet village on a lonely mountain in the Mesopotamian desert, two births will come to shape the destiny of nations. One boy blessed, the other branded. Would their strangeness unite them, or turn them into mortal enemies? As they struggle to make sense of a world that shuns the “other”, as they fight for the love of the one girl they desire, they will turn to their gods, only to discover that immortals are as fallible as men.

I was excited about this book. Ancient gods delving directly into the lives of characters pit against each other from birth, set in ancient days? There’s nothing not to like about that. And, it’s my first ever ARC review 🙂

Big picture stories where events pave the way for future happenings to be subverted, engaged, or otherwise interacted with in a way impossible if not for said events are a huge love of mine (think the movie: Signs). In Andrew Levkoff’s Little Gods, a case for this is laid…

The opening pages start with the look in the life of a soldier in Northwest Irag in 1988. At 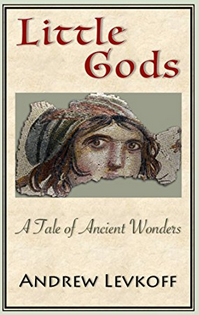 first confused by this point in history, eager to read about ancient Mesopotamia, these Supplementals quickly instilled in me a curiosity that taunted me to look ahead to see how this modern story was relevant to the characters of 76 B.C.E. – 56 B.C.E (my will was strong enough to find out at the end. No cheating done here).

Mr. Levkoff then gives us Scolotes’ story, starting just moments after his birth, and firmly laying the tragedy that becomes his life. So heart-wrenching is his situation, I found myself disliking everyone in the village for their superstitions, rather than buy the fact that this kid is bad. When Scolotes is finally, without question, given the label as the stories villain, I felt betrayed. It took me a few chapters to actively reprogram my brain to align with the flow of the book that needed this villain to propagate the outlying plot. Maybe that was the point. Maybe we’re supposed to see how the villain was pushed to his place, and feel so badly for him, we’re unsure where our loyalties lay. Still, I simply felt it was poorly developed. Sudden heinous acts seemed out of character so I was left thinking they were forced events to more easily push the story where it needed to go.

This happens with each of the major plot points. Rather than let relationships emerge, they’re told up front. It was these blatant notes that helped the story progress, rather than the actual storytelling. Very disappointing, as the actual story was interesting and engaging, if only it could have been left to emerge organically. It was only because of this foretelling that relationships were understood so one could feel vetted in the unfolding drama.

Much of Little Gods asks questions about the nature of how gods might influence the lives of the humans who worship them, and especially how interpretations of what those gods expect. There are a handful of instances throughout the book where it appears direct involvement by one, or more, gods has laid a hand in helping those in need. Instances that never culminate in anything more than an abstract philosophy that lays in the periphery of the story, not even necessary as the points are too subtle to pull things together.

I finally started to like the main hero, Melyaket about half-way through. When his epiphany arrives, I was excited to see the themes I’d been expecting from the book to finally emerge in force. Again, that never happened. Maybe it didn’t happen as part of the point? That the wrong decision was made and here’s the story because of that. That the point is the misunderstanding. The point is that there’s no grandness to come. Again, I found it too subtle if this was the case.

I really wanted to love this book. It had everything in it for me to love, but in the end, I found it lacking the transitions that would have melded it together into a great adventure. What we’re given is a nice tale of friends finding their way. It wasn’t a bad book, it was just filled with so much I wanted it to be that never was.