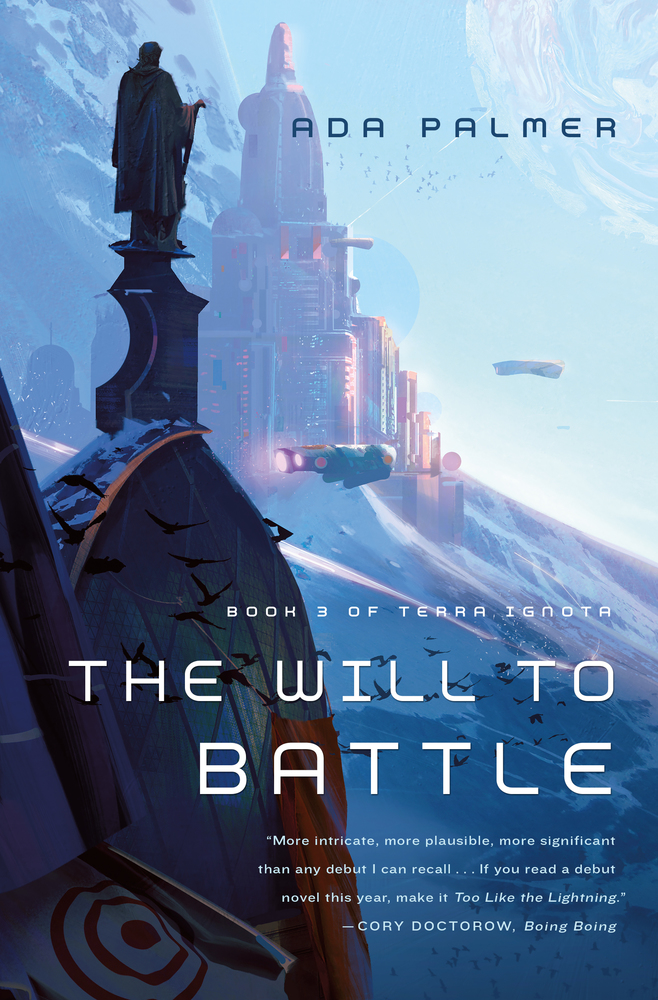 The Will to Battle, Book 3 of Terra Ignota By Ada Palmer

Better than the last, Ada Palmer continues to create a fabulously woven world.

“For Warre, consisteth not in Battell onely, or the act of fighting; but in a tract of time, wherein the Will to contend by Battell is sufficiently known…”

The world of Terra Ignota has been upended.  War is inevitable.  But after three centuries of peace, how does a war begin?  With every world ruler friends with every other, how do the nations pick sides?  How can war begin when every nation already has surrendered?  Genius convict Mycroft Canner has completed the history started in Too Like the Lightning and concluded in Seven Surrenders.  Now comes Mycroft’s chronicle of the guideless search for an order to the conflict as the world slouches toward war, while a living myth contends with a celebrity assassin, a corrupt priestess and a captive god to shape the conflict and the world to come.

From the first pages of this third installment, I was taken wholly into Ms. Palmer’s world of failing utopia. Book 2 was a little slower than Book 1, so I had a slight apprehension about how this third might read. Not to worry, this third book took right off and kept going.

As with the other books in the series (Too Like the Lighting & Seven Surrenders), I found the involvement of philosophical theories and their direct 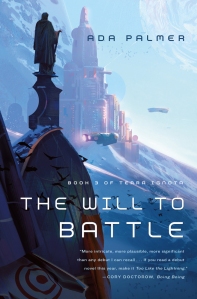 architecture in the cultures of this future world fascinating. Not being very versed in philosophy, I found the tidbits of extra knowledge handed out as a kind of passive scavenger hunt. The Will to Battle even goes so far as to use Thomas Hobbes, the main philosophical point-of-view of this book, as a voice to help sell Mycroft’s failing sanity.

There were some changes in the tone of this volume that I appreciated, especially as they were finally fully explained near the end, giving my growing opinions of the subtle undercurrents a surety I definitely needed by then. I will say, if you decide to read this book, which I highly recommend, be sure you’re clear on characters and their roles from the rest of the series, or you may find yourself struggling to keep things straight. Only because I was sure of who everyone was, did I not second guess my opinion of what was happening when certain voices came out to play.

The complexity of political and social spheres of influence; the way they’re all magically tied and interwoven continued to impress me. And, like the other books, there was that thing that popped out of nowhere causing me to slap myself on the forehead and say DUH! I knew I forgot something. Even so, with all the complexity, the story doesn’t overwhelm. With so many layers, I feel this is truly telling of how masterful Ada Palmer is of her craft. I’m more than looking forward to reading book 4, the final installment, of the Terra Ignota series  😉

Curious how I review? Check here or see a list of my most favorite here