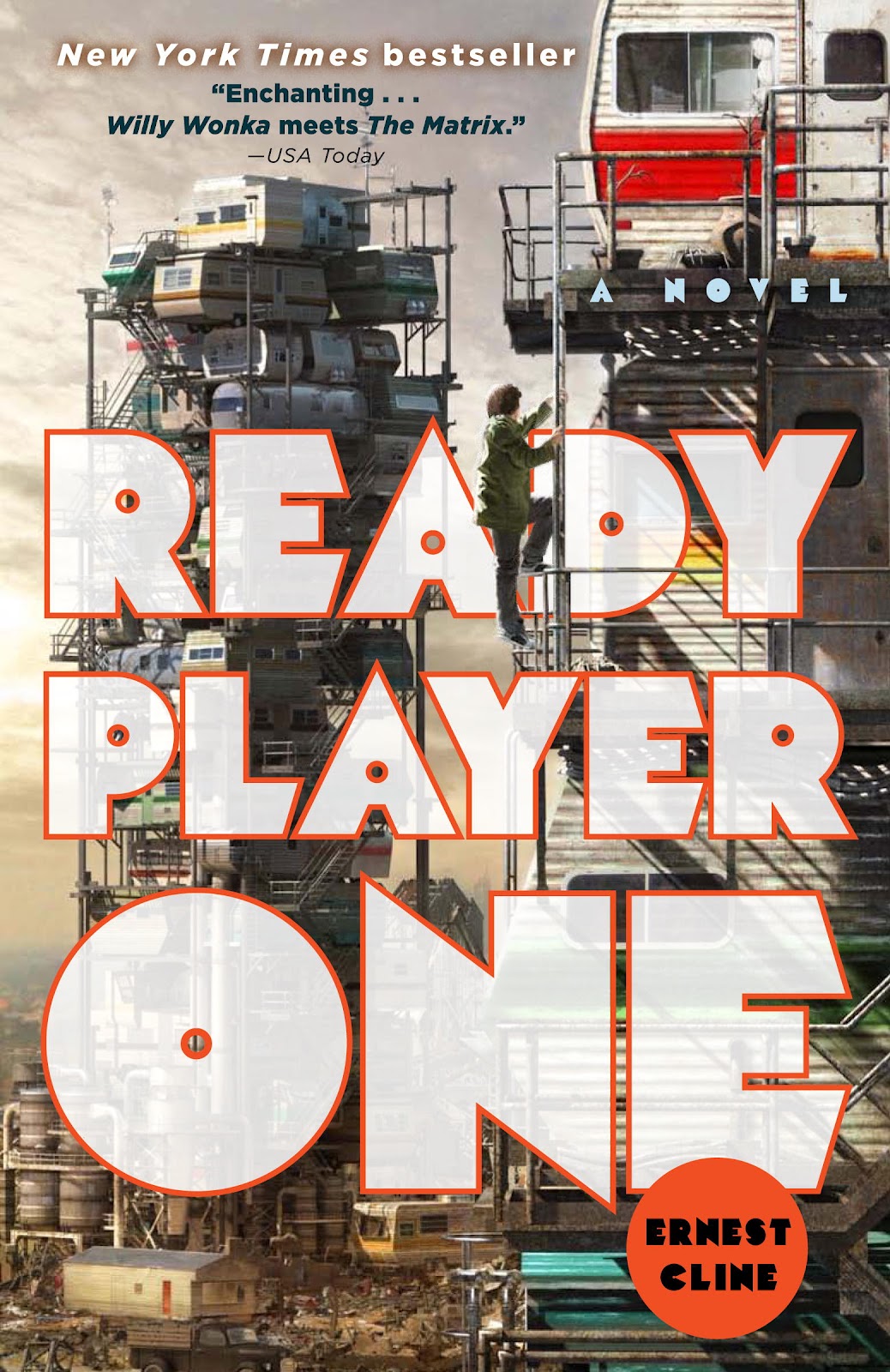 Ready Player One by Ernest Cline

It spoke to the geek in me. I couldn’t put it down.

Like most of humanity, Wade Watts escapes his grim surroundings by spending his waking hours jacked into the OASIS, a sprawling virtual utopia that lets you be anything you want to be, a place where you can live and play and fall in love on any of ten thousand planets.

And like most of humanity, Wade dreams of being the one to discover the ultimate lottery ticket that lies concealed within this virtual world. For somewhere inside this giant networked playground, OASIS creator James Halliday has hidden a series of fiendish puzzles that will yield massive fortune—and remarkable power—to whoever can unlock them.

For years, millions have struggled fruitlessly to attain this prize, knowing only that Halliday’s riddles are based in the pop culture he loved—that of the late twentieth century. And for years, millions have found in this quest another means of escape, retreating into happy, obsessive study of Halliday’s icons. Like many of his contemporaries, Wade is as comfortable debating the finer points of John Hughes’s oeuvre, playing Pac-Man, or reciting Devo lyrics as he is scrounging power to run his OASIS rig.

And then Wade stumbles upon the first puzzle.

Suddenly the whole world is watching, and thousands of competitors join the hunt—among them certain powerful players who are willing to commit very real murder to beat Wade to this prize. Now the only way for Wade to survive and preserve everything he knows is to win. But to do so, he may have to leave behind his oh-so-perfect virtual existence and face up to life—and love—in the real world he’s always been so desperate to escape.

A world at stake.
A quest for the ultimate prize.
Are you ready?

This book has been on my TBR for a few years. I got a text from my book-loving cousin that he’d just finished it, and that I would love it the day before I saw the trailer for the upcoming theatrical interpretation of the book (which looks awesome!). With so many signs from the book gods, I paused my other read to get into it.

This book pulled me right along. I fell right into the world of Ready Player One, the suspense of seeing who would win each contest putting me right on the edge of my seat. 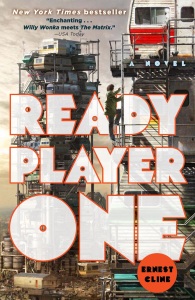 What is it about some books that will just grab you and run? Whatever it is, this book has that… I had to force myself to put it down to sleep, picking it right up the next day to finish.

I am a huge lover of video games, a love I purposefully shelf so I actually leave my house every once in awhile (Can you imagine if I had books AND games to occupy my time?! I’m trying to write a Novel too you know 😉  ). Maybe it was that love that so grabbed my attention, but I think it was the main character who was just so likable. Even if his dystopian life wasn’t like mine, it was still so relatable. I don’t know if I’ve ever actively routed so hard for a main character before.

The 80’s themed events were great fun. I’m not quite as much of an 80’s buff as the entire world seems to be, but I still very much appreciated the shout out to the old-school games and movies that kicked off our era.

I just really liked this book and think everyone, regardless of genre love, would find it entertaining. If you do like it, I recommend checking out MetaGame as well.

2 thoughts on “Book Review: Ready Player One by Ernest Cline”

Leave a Reply to Step Into A Book World Cancel reply

How's your writing project progressing? Focusing one one, or splitting your time? . . . When inspiration strikes, sometimes everything you did has to get scrapped... or at least reorganized and pushed off for the possibility of a complete overhaul. Ah well, that's how it works. I'm excited about this real epiphany on this project 🤓 . . . How's your writing project progressing? Focusing one one, or splitting your time? . . . . . . . . . . . . . . . . . . . . #projectepiphany #inspirationstrikes #overhaul #writingoverhaul #catchingbalance #thefoolspathseries #amwritingfiction #writerwriting #adayinthelifeof #authorlife #amwriting #whatareyouwriting #igwriter #igauthor #indieauthor #indieauthorlife #scrivenerorganization #screenshotpost #wordsarehard #wordswordswords #wordsmith #lifelivedinbooks
What are you doing to fill a more isolated life? . . . Perfect time to add some #worldofwarcraftclassic to the #todolist Becasue #skyrim and #Witcher3 weren't distraction enough 😏 🎮 . . . Super progress on my #writingWIP Have some alpha readers looking through it now while I get on to Book 2 🙌 . . . I'm staying away from fiction while I work on this project. I like where my head's at with it, so shying away from outside influences for now. I'm not even stressing about the TBR looming over my head 😬 Instead, I've dragged some non-fiction from the vault of my Kindle. . . . What are you doing to fill this more isolated life? . . . . . . . . . . . . . . . . #quarantinelife #muchmoretime #timetokill #workandplayandwork #hordetoalliance #nightelfpriest #healsforthewin #skyrimtraitor #writerwednesday #ishouldbewriting #gamerchick #over40gamers #joinourteam #wowclassicnoob #amateurgamer #thingstofillyourtime #booklover #amreading #bookloverslife #authorslife #awriterslife #writerslife #indieauthor #adayinthelife #adayinthelifeof
#marchreadingroundup . . What was your favorite March read? . . . I can't believe we're through March already. At this point, I shouldn't be surprised. I say it every month... . . . I spent most of my month re-reading a favorite series: The Dragonians by Adrienne Woods, along with the follow-up series: Beam. She'd added a couple since I last read them, and there's still 1 more to get to. Love reading the backstories of characters that shaped the current history of the story 🙌 . . . @rachel_r._smith needs to get cranking on her Ohanzee series 😉 😄 I need to know what's happening!!!! . . . What was your favorite read of March? . . . . . . . . . . . . . . . . . . . . . #booksofmarch #readingroundup #recordsoftheohanzee #dragonstories #dragonbooks #Marchreads #somanybookssolittletime #booklover #bookobsessed #lifelivedinbooks #bookaholic #wordswordswords #ishouldbewriting #goodreadschallenge #authorslife #writerslife #readingchallenge #darkbeam #rubicon #indieauthorsareworthit #whatsyourfavoritebook
Where does your inspiration come from? . . . Desiree is Sita meets Blade, with HUGE changes from that original plan. Her first incarnation was as a vampire hybrid. When my obsession with vampires faded, they all but disappeared from Dee's universe. The entire story changed. She changed. References of vampires remain, but no longer share the limelight. Or any light, really. . . . Books still play a huge part in inspiring my stories, though dreams have taken a huge leap above that over the last few years. So many journals filled with mostly remembered scenes and characters that hope to make it into something coherent 😆 . . . What inspires you? . . . . . . . . . . . . Graphic courtesy of @jason_piraino_tattoos #whatinspiresyou #inspiration #waitingforinspirationtostrike #inspirationstrikes #indieauthor #awriterslife #writerslife #ishouldbewriting #meetthecharacter #behindthescenes #blueeyedgirl #vampirestrike #notthisagain #amwritingfiction
Do you believe in magic? . . . "Those who do not believe in magic will never find it." -Roald Dahl . . . I feel like this is a quote about attitude, about outlook, and about openness. What do you think? . . . Do you believe in magic? . . . . . . . . . . . . . . . . . . . . . . . . . . . . . . #motivatemonday #motivatemondays #doyoubelieveinmagic #seekandfind #inspireothers #inspirationalmonday #northernlights #inspirationalquoteoftheday #favoritequotes #bebetter #riseup #Mondaymotivationalquote #suffer #discipline #morningroutine #morningritual #getitdonethendoitagain #livingpains #learningcurve #whatsayyou #attitudecreatesreality
#wordsarehard . . . It’s become ridiculous 🤦‍♀️ Luckily, my life partner is intuitive enough to decipher my single word utterances that stutter into other word sounds. A base level of communication has continued. Basically, I’m still being fed and the air conditioner is installed. #progressisprogress . . . Anyone else have this problem? . . . . . . . . . . . . #languagebarriers #readmymind #mindreadingduo #adayinthelifeofawriter #indieauthorlife #amwriting #amwritingfiction #wordsounds #communicationdifficulties #authorlife #coherentsentences #sundaypostiing #anyoneelsehavethisproblem

Exploring What Captivates, Inspires, and Intrigues Us.

JOIN HER ON AN ADVENTURE

The author blog for R. K. Brainerd; my thoughts and adventures

When life hands you lemons, go find some gin and tonic, then read a book!

BE CREATIVE. BE INNOVATIVE. BE YOURSELF.