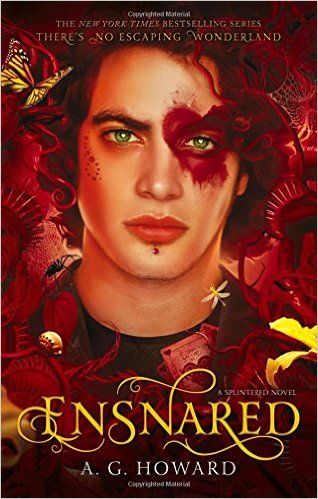 Ensnared, by A. G. Howard

After surviving a disastrous battle at prom, Alyssa has embraced her madness and gained perspective. She’s determined to rescue her two worlds and the people and netherlings she loves. Even if it means challenging Queen Red to a final battle of wills and wiles . . . and even if the only way to Wonderland, now that the rabbit hole is closed, is through the looking-glass world—a parallel dimension filled with mutated and violent netherling outcasts.
In the final installment of the wildly popular Splintered trilogy, Alyssa and her dad journey into the heart of magic and mayhem in search of her mom and to set right all that’s gone wrong. Together with Jeb and Morpheus, they must salvage Wonderland from the decay and destruction that has ensnared it. But if they succeed and come out alive, can everyone truly have their happily ever after?

Ensnared was my favorite of the trilogy, and easily made my struggles with the second installment worth it (not that I didn’t like that one too. I rated it 4 stars). Unhinged was a fantastic bridge from book 1 to book 3, the uninspired final battle of Unhinged forgotten by the fantastical world of AnyElseWhere we’re introduced to in this final story of the series.

Allysa seems to have embraced her macabre Wonderland side. She’s finally not afraid to use her power to incite fear in those she needs to get done what needs doing in order for her to save Jeb, Morpheus, and her mom. I have to admit, I was rooting for this version of Alyssa since Splintered.

Alyssa’s father’s story was fantastic in the cleverest of ways to give the impossible a possibility. And isn’t that what Wonderland tales are all about? How well his story was placed, then forgotten, then told was marvelous. It also gave a sort of suspense to the pacing of the narrative as, while we’re learning new and fun facts, we’re also mentally screaming for things to hurry up so we can see how Jeb and Morpheus are faring, or even if they’re still alive.

Jeb and Morpheus’ relationship was a superb twist. Their adventures in AnyElseWhere so fun, and an outstanding way to flip some roles, and help characters learn and grow. Heart wrenching and fantastical, their travels in this land really helped root A. G. Howard in my bookish heart.

Not to disappoint, the ending climax was another well-told adventure in perfect Wonderland glory. Alyssa’s ultimate decision with how to deal with her love triangle left me with mixed feelings, though really it was a brilliant way to leave us. Part of me hopes more of Alyssa’s Wonderland adventures are spawned, though maybe it is better that our imaginations are left with something to long for.

Curious how I review? Check out: My Book Reviews